Marcus Aurelius thought the Universe was divine. He was a Pantheist.
Are you? Find out now at the Natural Pantheism site.

Everything harmonizes with me, which is harmonious to thee, o Universe. Nothing for me is too early or too late, which is in due time for thee. 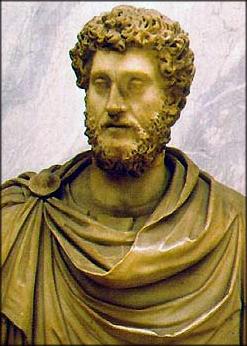 The Roman emperor Marcus Aurelius was perhaps the only true philosopher- king in the history of the world. He was not an original nor a systematic philosopher, but in his meditations, a series of notes to himself, he formulated his pantheist Stoic beliefs with a passionate religious conviction.

He shared the basic Stoic belief in the divinity of the cosmos as an intelligent being with a soul, and stressed (perhaps too fatalistically) the harmony of all things and the importance of resigning oneself to whatever happened.

Marcus Aurelius reigned from 161 AD to 180 AD. He seems to have been a good and conscientious ruler who was magnanimous towards his enemies. He banned informers, stamped down hard on corruption, and freed slaves at every opportunity. Although he tolerated the circus, he ordered gladiators to fight with blunted points. Needing extra funds for his wars in Eastern Europe, he refused to raise taxes but instead held a public auction of his own golden tableware and of his wife’s silk and gold embroidered dresses.

The Meditations were written day by day, in every situation including war. They often appear to be responses to the stress of supreme power, from the imminent fear of death in battle, to the trials of everyday life.

With hindsight Marcus’ greatest omission was that he did not impose Stoicism as the imperial religion, with as much rigour as Theodosius later imposed Christianity. Had he done so, the history of the world might have turned out very differently. But the fact that he was more tolerant might be regarded as another of his virtues. 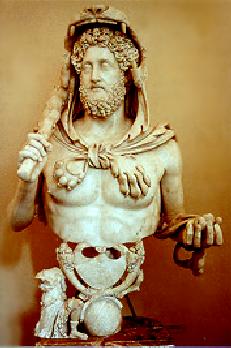 Marcus’ greatest trial was his son Commodus, who succeeded him in a disastrous reign that rivalled Nero’s for corruption and cruelty. One report of Marcus’ death suggests he was poisoned by doctors acting on Commodus’ behalf.

Commodus was, so it was rumoured, the son of one of the gladiators whom Marcus’ wife Faustina took for lovers. According to his biographer, Commodus was “base, shameless, cruel, lecherous, defiled and debauched.” While his father sold his own property to serve the empire, the son milked the empire to enrich himself. He frequently took part in the circus as a secutor (sword-man), and considered himself part of the gladiators’ corps. He shared the same birthday, and the same interests in brutal sadism, as Caligula.

Commodus renamed Rome Commodiana, and renamed the months after his own names and titles. He had countless Romans executed, including members of the elite. He died in 192 AD, but not in gladiatorial combat. He was assassinated as a result of a plot by his household staff, who first tried to poison him, and when that failed, had him strangled by an athlete.

He was succeeded by Pertinax who attempted to reform the corruption Commodus had introduced, and for his pains was murdered by his own guard. The guard then auctioned the empire to the highest bidder, Julianus.

Unity of the universe.

All things are implicated with one another, and the bond is holy; and there is hardly anything unconnected with any other things. For things have been co- ordinated, and they combine to make up the same universe. For there is one universe made up of all things, and one god who pervades all things, and one substance, and one law, and one reason. [7.9]

The universal nature out of the universal substance, as if it were wax, now molds a horse, and when it has broken this up, it uses the material for a tree, then for a man, then for something else… . Nature which governs the whole will soon change all things which you see, and out of their substance will make other things. and again other things . . . in order that the world may be ever new. [7.23]

The nature of the Universe loves nothing so much as to change the things that are and to make new things like them. For everything that exists is in a manner the seed of that which will be. [4.36]

Belonging to the whole.

You must now at last perceive of what universe you are a part, and of what administrator of the universe our existence is an afflux, and that a limit of time is fixed for you, which if you do not use for clearing away the clouds from your mind, it will go and you will go, and it will never return. [2.4]

The soul of man does violence to itself, first of all, when it becomes an abscess and, as it were, a tumor on the universe, so far as it can. For to be vexed at anything which happens is a separation of ourselves from nature, in some part of which the natures of all other things are contained. [2.16]

You will give yourself relief, if you do every act of your life as if it were the last, laying aside all carelessness and passionate aversion from the commands of reason, and all hypocrisy, and self-love, and discontent with the portion which has been given to you. [2.5]

Harmonizing with the universe.

This you must always bear in mind, what is the nature of the whole, and what is my nature, and how this is related to that, and what kind of a part it is of what kind of a whole; and that there is no-one who hinders you from always doing and saying the things which are according to the nature of which you are a part. [2.9]

If you work at that which is before you, following right reason seriously, vigorously, calmly without allowing anything else to distract you, but keeping your divine part pure, as if you might be bound to give it back immediately; if you hold to this, expecting nothing, fearing nothing, but satisfied with your present activity according to nature . . . you will be happy. And there is no man who is able to prevent this. [3.12]

Take away the complaint “I have been harmed,” and the harm is taken away. [4.7]

You have embarked, you have made the voyage, you have come to the shore: get out. [3.3]

You have existed as a part. You shall disappear in that which produced you; or rather, you shall be received back into its seminal principle by transmutation. [4.14]

Pass then through this little space of time conformably to nature, and end your journey in content, just as an olive falls off when it is ripe, blessing nature who produced it, and thanking the tree on which it grew. [4.48]

ARE YOU ATTRACTED TO THE IDEAS OF STOICISM?
THEN YOU MAY WELL LIKE SCIENTIFIC PANTHEISM.

Scientific Pantheism was partly inspired by Stoicism and is honoured to consider Stoicism a predecessor. There are many areas of overlap. We share with Stoics a deep reverence for the cosmos. We share a belief in living according to nature, and an acceptance of natural death. We also believe that body and spirit are both made of the same substance.
There are of course differences. Scientific Pantheism does not believe in a cosmic mind or in providence (nor do I think that the Stoics, who were good scientists, would believe in this if they were alive today). Scientific Pantheism does not believe that the Stoic renunciation of bodily pleasures or intense emotions is the only or the best way to shield oneself against suffering. It is possible to experience these while retaining an essential core which remains intact through every upheaval.
If you are attracted by the Stoic philosophy, then do check out the

Scientific Pantheism site. Our beliefs are summarized in the scientific pantheist credo.