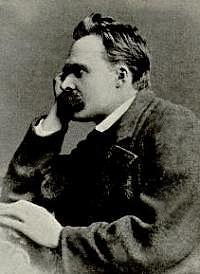 Did you ever say yes to a pleasure?
Oh my friends, then you also said yes to all pain.
All things are linked, entwined, in love with one another.

Friedrich Nietzsche was born in 1844 near Leipzig. He studied philology and at the tender age of 24 was appointed professor of classical philology at Basle University. Here he wrote his first books, but in 1877 on he retired from academic life due to ill health and devoted himself to writing. In 1889 he became insane, and remained so until he died in 1900.

Nietzsche’s dark side is well known. He glorified war, and promoted the idea of a “superman” immune to humanity’s most distinguishing characteristic -compassion for the sick and the poor. He rejected conventional morality in favour of acknowledging and indulging an unashamed “will to power” – the desire of humans to dominate, exploit and expropriate those weaker than themselves. He advocated the subjugation of women, who were there only for reproduction and the recreation of warriors.

But Nietzsche cannot be summed up in one paragraph or even in a dozen, He was not a coherent philosopher: he did not set out to create a solid philosophical system. Indeed he could hardly write an argument at book length, and most of his works were strings of short passages. But he was a brilliant and mercurial writer, an iconoclast of all idols, and a forerunner of many later movements: of modernism and of post-modernism, of Freud and of Adler, of futurism, of fascism, of modern atheism, humanism, and sexual liberation.

Although (or perhaps because) he was the son of a protestant clergyman, Nietzsche saw Christianity as a life-denying religion which suppressed our connection to nature and to our own lives and instincts, and glorified self-abasement and abstinence. He produced some of the most biting attacks on transcendental religion ever written.

In reality human life, the earth, the universe, have no purpose or meaning. Thus Nietzsche’s enterprise begins as nihilism, as negation of traditional ethics and religion.

At the same time the underlying motive for this denial is a burning love of life, a deep sensual love of everything that exists, and of the whole of experience, good and bad, pleasure and pain. We don’t have to feel we are on trial for our eternal lives, we don’t have to prove anything to an invisible judge in the sky. That realization can be a liberation.

So then on the far side of the tunnel, nihilism turns into its opposite: affirmation of all that exists, despite or even because it has no purpose. Nihilism becomes a kind of salvation – a rescuing of the world from the oppressive and corrosive idea of a personal judging God.

Nietzsche never publicly called his own position pantheism. But he was an admirer of Spinoza and above all of Heraclitus. He realized that his world-affirmation came close to pantheism – and even toyed with the idea of a pantheism of his own kind – a pantheism without ethics, but joyously accepting every moment of existence.

In both these respects – his hatred of Christianity and his affirmation of earth – Nietzsche clearly had a powerful influence on D. H. Lawrence. In Nietzsche’s case this affirmation is so powerfully felt that he wants everything, every part of his life, to be repeated over and over again in its smallest details.

Unfortunately he was not content with simple affirmation, and still hankered after the lost purpose and meaning that Christianity appeared to provide. The enjoyment of ordinary life was insufficient – Nietzsche felt the need to replace the divine purpose of Christianity, with a purpose that humans themselves would create – the insane goal of moving beyond humanity to a “higher” man, the superman.

The universe and life have no purpose

We must be careful not to attribute heartlessness or unreason to the cosmos – nor their opposites. The cosmos is neither perfect, nor beautiful, nor noble, nor does it desire to be any of these; certainly it does not aspire to mimic humans! It is not at all affected by any or our aesthetic and moral judgements! It has no drive for self- preservation, nor any other instincts. And it has no laws. Let us not say that there are laws in nature. There are only necessities: there is no-one who commands, no-one who obeys, no-one who oversteps the mark. . . .
When will all these shadows of God cease to darken us? When will we finally have rid nature of God and gods? When will we be able to begin to naturalize ourselves with a clean, newly discovered, newly liberated Nature?
The Joyful Science 109

We invented the concept of purpose. In reality purpose is lacking. . . We are necessary, we are a piece of destiny, we belong to the whole, we are in the whole. There is nothing that could judge, measure, compare, condemn our existence, because that would be to judge, measure, compare or condemn the whole … But there is nothing but the whole! … The concept of God was until now the greatest objection against existence. We deny God, we deny our responsibility to God. Thus do we redeem the world.
Twilight of the Idols, The four great errors, 8.

Affirmation of life and the world

All in all, from now on I want to be at all times only an affirmer!
Gay Science, 276.

The word Dionysiac means: a drive to unity, a reaching out beyond personality, everyday life, society, reality, across the abyss of transience; the passionate-painful overflowing into darker, fuller, more uncertain circumstances; the ecstatic affirmation of the inclusive character of life, as something that remains through all change the same, with the same power and the same bliss; the great pantheistic conviviality and sympathy, which accepts and sanctifies even the most terrible and doubtful qualities of life; the eternal will to procreation, to fertility, to recurrence; the feeling of unity of the necessity of creation and destruction.
Nachlass (Werke III 791)

Did you ever say yes to a pleasure? Oh my friends, then you also said yes to all pain. All things are linked, entwined, in love with one another.

Did you ever want once to be twice? Did you ever say “Fortune, instant, moment, I love you!” If so, then you wanted everything back.

Everything over again, everything eternally, everything linked, threaded, in love, oh, just so did you love this world.

You eternals, love her for ever and at all times, and even to woe you will say: pass away, but return. For all joy longs for – eternity.

What does joy not want? She is thirstier, heartier, hungrier, more terrible and more secret than all woe; she wants herself, bites into herself; the will of the ring struggles in her.

She wants love, she wants hate, she is profligate, she gives, throws away, begs someone to take her, thanks him if he does, she loves even to be hated.

So rich is joy that she thirsts for pain, for hell, for hate, for shame, for cripples, for earth – for this earth, oh, she knows it well!
Also Sprach Zarathustra 4.11.

A pantheism beyond good and evil?

To believe [as pantheism does – Ed] that everything is perfect, divine, eternal, also forces one to believe in eternal recurrence. Question: now that we have made ethics impossible, is such a pantheistic affirmation of all things also made impossible? No: in principle only an ethical god is overthrown. Is there any sense in imagining a god beyond good and evil? Would a pantheism of this kind be possible? Can we remove the idea of purpose from the process, and yet still affirm the process? That would be the case, if something were achieved within that process and at every moment of it – and always the same …
Every basic trait underlying each and every event, expressing itself in every event – if it were experienced by an individual as his own basic trait – would force that person triumphally to endorse every instant of everyday existence.
Nietzsche, Werke, III, 853.

PANTHEISM
is a profound feeling of reverence for Nature and the wider Universe
It fuses religion and science, and concern for humans with concern for nature.
It provides the most solid basis for environmental ethics.
It is a religion that requires no faith other than common sense,
no revelation other than open eyes and a mind open to evidence,
no guru other than your own self.
For an outline, see Basic principles of scientific pantheism.

If you would like to spread this message please include a link to it in your pages. See also Help spread pantheism.

About the Author: Paul Harrison

Dr Paul Harrison is an international best-selling and international award-winning writer on environment, development and poverty. He has authored six books, five of them published by Penguin. They include Inside the Third World, Inside the Inner City, and The Third Revolution. Dr Harrison has worked as a high-level editor and writer for many United Nations agencies, including flagship reports of the UN Environment Programme, UN Food and Agriculture Organization and the UN Population Fund. He holds a United Nations Environment Programme Global 500 award and a Population Institute Media Award for his books. Dr Harrison is the founder and president of the World Pantheist Movement and author of Elements of Pantheism