Bhagavad Gita – the song of God

Home>>Bhagavad Gita – the song of God
­
Previous Next

Bhagavad Gita – the song of God

Without beginning, middle or end, of infinite power, of infinite arms, whose eyes are the moon and sun,
I see thee, whose face is flaming fire, Burning this whole universe with Thy radiance. [xi.19] 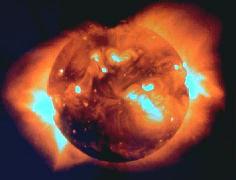 The Bhagavad Gita is the highest expression of philosophical Hinduism. It is a chapter of the immense Indian epic, the Mahabharata, the saga of the war between the Pandavas and the Kauravas.

Arjuna, hero of the Pandavas, is about to confront the army of the Kauravas on the battlefield of Kuruksetra. Among the opposing army are his friends and relatives. Convinced that it would be wrong to kill his own kinsmen, Arjuna is overcome by despair. He lays down his bow and declares that he will not fight.

The God Vishnu, incarnated as the charioteer Krishna, explains that Arjuna should do his duty and do battle. The human soul, which is part of the universal soul, is immortal – therefore no-one is actually slain. If people perform the duties appropriate to their station, without attachment to success or failure, then they cannot be stained by action. The rest of the poem provides the full philosophy underlying this insight.

The Gita is variously dated between the third century BC and the fourth century AD. The reason for uncertainty is that the Gita is not always consistent and may be the work of several hands. One strand was probably written by a follower of the philosophy expressed in some Upanishads, in which Brahman is the highest unity underlying reality. Another strand, focused on a more personal deity, may have been added later by a devotee of the supreme god Vishnu.

The Gita is panentheistic rather than pantheistic. God is in all things, and all things are in God. But the visible universe springs from only a fraction of Vishnu’s glory. There is also a hidden part of God which extends beyond the universe.

Nevertheless, the Gita contains probably the most powerful and thoroughgoing expression of panentheism in world scripture. The one God is the pinnacle of all things – the radiant sun of lights, the thought organ of sense organs, the intellect of beings, the ocean of waters, the Himalaya of mountain ranges, the Ganges of rivers. He is also the inherent essence of everything – including evil. He is the gambling of rogues, the courage of the courageous, the rod of disciplinarians, the statecraft of politicians, the Knowledge of the knowing.

The text is from the translation of Franklin Edgerton, The Bhagavad Gita, Harper Torchbooks, New York, 1944.

All is one and one is all.

Himself as in all beings,
And all beings in himself,
Sees he whose self is disciplined in discipline,
Who sees the same in all things.

Who sees Me in all,
And sees all in Me,
For him I am not lost,
And he is not lost for me.

Whoso reveres me as abiding in all things,
adopting the belief in oneness,
though abiding in any possible condition,
that disciplined man abides in Me.
[vi. 29-31]

God is indescribable radiance and power.

If the light of a thousand suns
should suddenly burst forth in the sky
it would be like the light
of that exalted one.

The whole world there united,
And divided many-fold,
the son of Pandu then
beheld in the God of Gods’ body

“A mass of radiance, glowing on all sides,
I see Thee, hard to look at, on every side
With the glory of flaming fire and sun, immeasurable.

“Without beginning, middle or end, of infinite power,
of infinite arms, whose eyes are the moon and sun,
I see thee, whose face is flaming fire,
Burning this whole universe with Thy radiance.”
[xi.12-19]

God is source, and maintainer of the universe.

My higher nature knows:
It is the Life, great-armed one,
By which this world is maintained.

Beings spring from it,
All of them, be assured,
Of the whole world I am
The origin and dissolution too.

On Me all this (universe) is strung,
Like heaps of pearls on a string.
[vii.5-7]

Taking as base my own material-nature
I send forth again and again
This whole host of beings.
[ix.8]

Whatsoever of all beings
Is the seed, that am I, Arjuna;
There is none such as could be without
Me, no being moving or unmoving.
[x.39]

God is the beginning and end. Cosmic cycles.

I am death that carries off all,
And the origin of things that are to be.
[x.34]

All beings, son of Kunti,
Pass into my material nature
At the end of a world-aeon; them again
I send forth at the beginning of a new world-aeon.
[ix.7]

God is in everything. God is the central quality in all objects.

I am taste in water, son of Kunti,
I am light in the moon and sun.
The sacred syllable Om of all the Vedas,
Sound in ether, manliness in men.

I am the goodly odor in earth,
And brilliance in fire am I,
Life in all beings,
And austerity in ascetics am I.

Know me as the eternal seed of all beings.
I am intelligence of the intelligent.
Majesty of the majestic am I.
[vii.8-10]

I am the soul, Gudakesa,
that abides in the heart of all beings.
[vii.20]

By me is pervaded all this universe,
by me in the form of the unmanifest.
All beings rest in me,
And I do not rest in them.
[ix.4]

Whatsoever being possesses lordliness or majesty or greatness, know thou that every such being springs from a fraction of my glory
I support this entire world with a single fraction of myself.
[x.41-42.]

Foolish men conceive me, the unmanifest, as having become manifest. They do not know my higher nature, everlasting and supreme.
[7.24]

Conquer thine enemies and enjoy prospered kingship.
By me myself they have already been slain long ago.
Be thou the mere instrument.
[xi.33]

a spirituality centered around reverence for Nature and the Universe .
It fuses religion and science, and concern for humans with concern for nature.
It provides the most realistic concept of life after death,
and the most solid basis for environmental ethics.
It is a religion that requires no faith other than common sense,
no revelation other than open eyes and a mind open to evidence,
no guru other than your own self.
For an outline, see Basic principles of scientific pantheism.

If you would like to spread the message of scientific pantheism please include a link to Pantheist pages in your pages and consult the Help spread Pantheism page.

About the Author: Martin